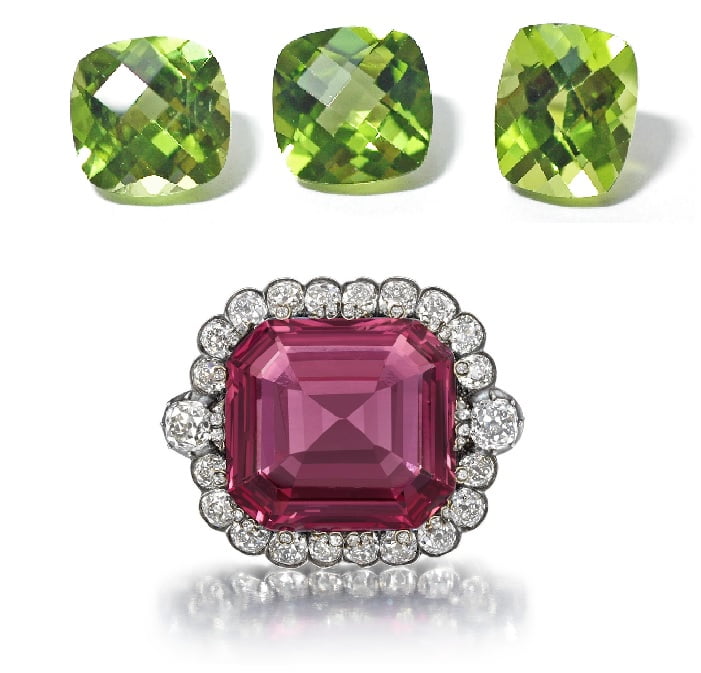 Peridot is the gem variety of forsterite that belongs to the mineral group of olivine and it is the first gem to be drafted among the modern August birthstones. It has a chemical composition of (MgFe)2SiO4 where its magnesium and iron is interchangeable between one another.

To differentiate peridot from other same gemstones, its physical properties must be examined. For starters, peridot has an average hardness of 6.5-7 but hard enough to withstand daily wear. On the rough end, it belongs to the orthorhombic crystal system that usually has a rectangular prism shape. Furthermore, this gem is idiochromatic. As an idiochromatic gem, it obtains its colour from an element essential for their chemical structure instead of trace elements.

Despite being unpopular, here are a few reasons why peridots are precious. Although olivine can be common, fine peridot can be rare. To be clear, fine peridot refers to those that are extremely eye-clean, desirable colour, with considerably good size. Other than that, due to low demand, less fine quality peridots are plentiful and readily accessible of various sizes for various cutting styles. As for now, there are only two major sources for peridot, Myanmar and Pakistan, whereas other sources only produce small quantities.

Peridot further became known to the public when it was inducted into the original birthstone list. Prior to that, in ancient times, many associate peridot to the light and subsequently refer to it as “gem of the sun”. They also believe that wearing peridot can ward off terrors of the night, or evil spirits.

Perhaps the most confused gem of all times, the spinel has been worshipped for mistakenly thought to be ruby for ages. A doppelganger or sort, both have the same colour and source of origin.

Although both ruby and spinel were distinguished as separate minerals after some time, spinel soon fell second to ruby as a red gemstone. Only through years of continuous recognition of spinel’s beauty along with the diminishing supply of fine rubies brought spinel into the limelight.

Spinels are at 8 of the Mohs hardness scale, which makes them excellent gemstones for daily wear. Spinel can be also very versatile in its colour as it comes in the hue of pink, purple, violet, blue, and grey. Furthermore, due to its singly refractive properties, it makes spinel brighter and livelier compared to other red gemstones.

Spinel is the latest addition to the modern August birthstones list when it was inducted in 2016 as an alternative gemstone for peridot. Historically, red gemstones have always been linked to blood. Thus, the beliefs of wearing red gems including spinel to enhance vitality and replenish energy.

© 2021 The Gem Museum. Created for free using WordPress and Colibri

Please log in again. The login page will open in a new tab. After logging in you can close it and return to this page.